The Italian Gem of A Restaurant that Saved My NYC Wedding

The giant hanging neon fish outside indicates a time when neon was ordinary. 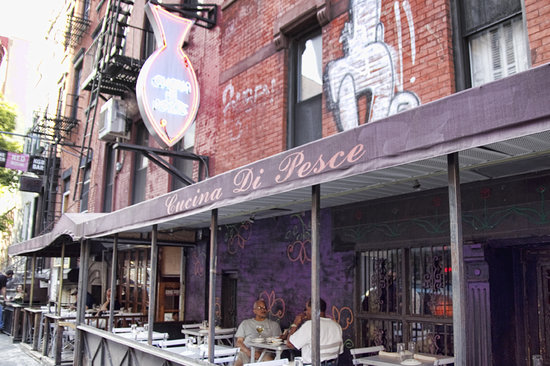 My wife-to-be and I had stumbled upon it in our first year in the City, when every weekend and a number of weeknights were spent in the East and West village, reveling in Indian cheap eats, or great Pizza or even terrible fusion served in wonderfully decorated joints. It was one of the those places that we thought we knew, and raced past in our rush to establish our bona fides as New Yorkers, no longer Bostonians.

Cucina’s pasta was clearly homemade, their meatballs succulent, and the sauces light with the kind of savor that had you mopping the plate with rolls even when you’d eaten too much. 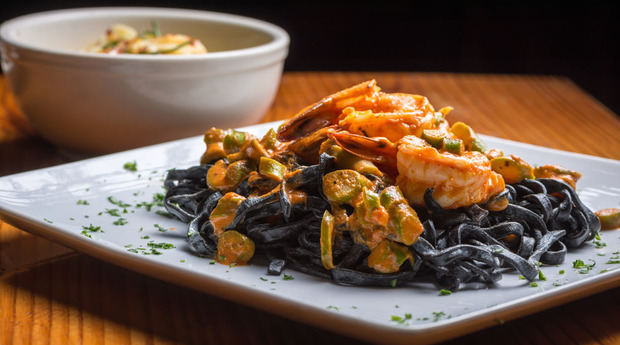 The softly spoken, nearly-all male staff were quiet, efficient and the kind of polite that appeals to parents and girls out on a date.

Our central haunt, though, was Cooper 35, an asian bistro with an outdoor patio (sadly now closed). It was one of a number of small places like Dojo that we both loved. Cheap drinks, cheap, easy, uncomplicated, undemanding foods that let us keep our heads in the whirl of the ‘scene’ that we were imagining was going on around us. We’d entertained friends there, and when it came time to plan a reception, we reserved a lobe of the the garden patio.

And then the spring of the collapsing cranes happened. 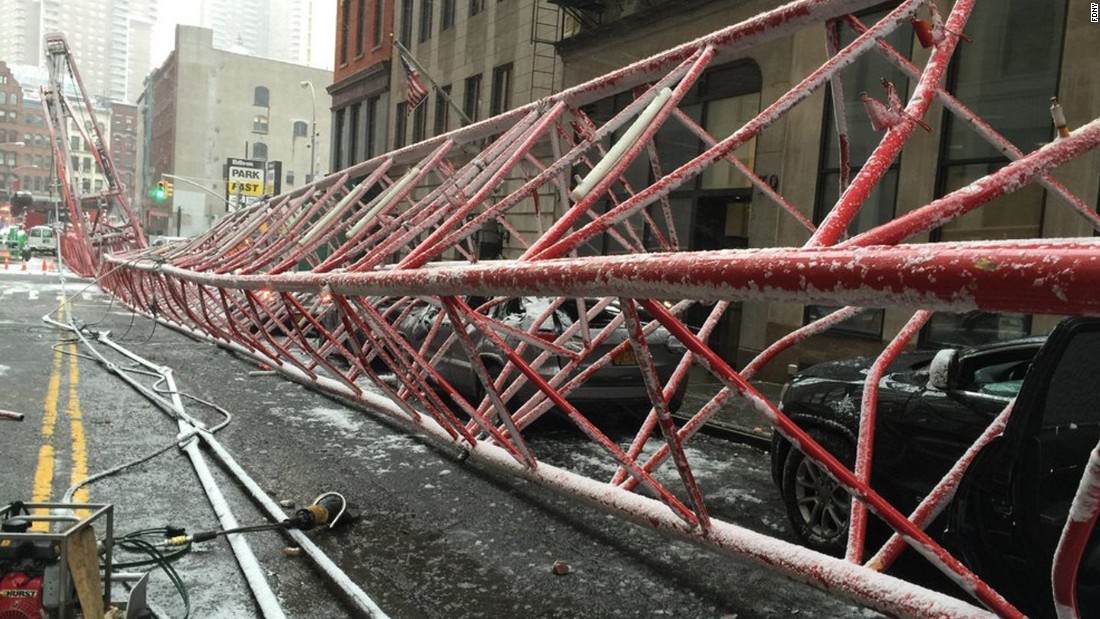 A crane collapsed in midtown. Then one on the upper East Side. Mayor Bloomberg ordered a survey of the cranes in use across the city. It was two weeks before the wedding, and we got a call …

“We’re sorry, but there will be a crane on the next door lot” said the older man on the other side of the phone. The space-age hotel going up next door was a Frank Ghery number with frosted steel curves looming over the four-story Mansard-roof 18th century mansion.

He was not going to give us half his restaurant, even for a midday Saturday afternoon wedding.

He was very sorry, but we’d have to make other arrangements.

And just like that , we had no place for our reception.

We panicked. We spent all weekend looking for a place that had a patio for reservation for 50 people – the size of our tiny reception. Time after time, we were turned down. Some places were unwilling to close their patio for two hours for a guaranteed feast. Other places had a policy against it. We were getting desperate.

“they have an atrium”

“look at the link”

I looked up at her… she smirked that smirk that made me want to kiss and/or strangle her.

“Is it available the saturday after ne… “

The slender man with the skinny tie had a binder, and we sat in the front bar and discovered that not only were the prices reasonable, but the space … that space was perfect.

In fact, it was BETTER, we just didn’t know it.

The day we got hitched, the public garden we’d rented was almost a hundred and ten degrees. My little brother nearly passed out from heat stroke while trying to take pictures. The plannel leisurely four-block parade to the restaurant was noticibly thinned, as those over 50 took cabs.

We arrived, drenched in our own sweat. She was purple. The AC was on blast. The staff rushed us, escorting us through the narrow , hidden way to the sunny, cool back atrium. A cool, iced towel was produced …

“Under your leg, missus’” said the sixty-something head chef, who appeared briefly to offer his experience. A smaller towel went under her wrist pulse points.

Guests started arriving, curiously behind the twenty of us who’d walked. My new wife was down to a pinkish hue, and as I helped people get to their seats, urging them to take advantage of the open bar.

Sea bass, pasta, hanger steak were all delicious, and the staff were expertly invisible. Sinatra played over the room’s speakers at the behest of my uncle’s iPod, and as he left, my grandfather scooped the bride up out of an embrace and the whole room started dancing . 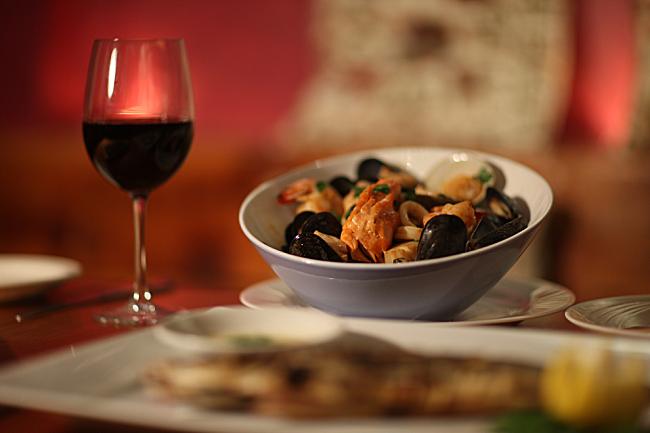 Only later did I think about how different the intimate, quiet and bright atmosphere was from our ‘first’ choice – an outside garden that would have been boiling, up against the honking noise of cooper square and certainly amid the ruckus of other patrons.

I recently revisited the venue, and I was in shock to see it half-hidden in construction debris. Inside, the expansive , moody dining room to the right was gone, the whole double archway replaced by a neat row of tables. Across the room, where the giant oversized bar used to be, a similar set of tables.

The hedonistic atmosphere was warm, cozy, intimate, and the bar was now a fifth the size, just the right size for a family place, which is what this place is. 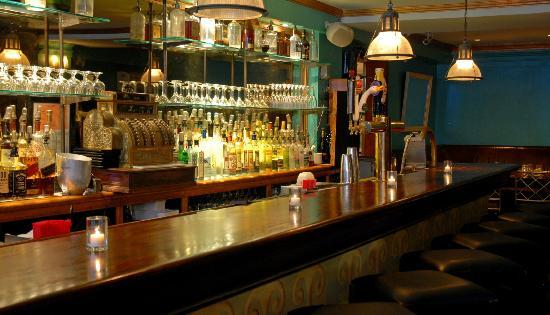 “What happened?” I asked the barman, who also happened to be the owner.

“Oh, the guy in the next building tripled our rent, so we cut down.”

“Are you guys okay?”

“Oh yes, I mean, I’m worried about this summer. It’s been bad the last two months. “

“You don’t do restaurant week, right.”

The menu was smaller, but still as affordable as I remember.

“Yes, I remember. I was the guy with the binder”

We both laughed. It was eight years ago. His face was more careworn, leaner.

After my pint was empty I asked to see it .

He showed me through the narrow way, and my sad heart leapt.

It was like seeing an old friend that had surprisingly prospered amid strife. 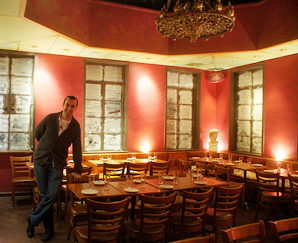 The room was repainted, refreshed, and spotless. The floors were shiny and I could smell the tail end of the shellac drying. It was beautiful.

“She’s doing double duty nowadays as our overflow dining room” he said, I wasn’t looking at him, but I could hear the smile in his face. I could feel the upset from the rent raises and the forced compromises disappear. It almost brought back the love the the room that day, between his hope and my memories.

Where to find it:

Sean has also written about being hungry in Paris.

Sean Munson
I live and work in New York, where I scribble for fun and profit

Finding My Place in NYC (via the Perfect Coffeeshop, Bar and Soulmate)

How Flour + Water Restaurant Inspired Me to Make Homemade Pasta