When I was in my twenties, I was a little bit of an asshole. I just thought I was way too cool for school.

I prided myself on having a really diverse group of friends, from all walks of life. The UNcoolest type of friend to have? The work friend. By far.

I interviewed for the job (that ended up bringing me to New York; spoiler alert) on a cold January day. I looked at the other candidates with disdain. “Losers,” I thought. (Remember—I was an asshole.) They looked boring as hell. We made the requisite small talk, while I quietly thought about the quickest and most cost-effective way to get back to the airport.

One woman, when asked where she was from, said, “Philly.” I was bored and had already ruled out the place as a possible employer, so I said, “West Philadelphia?” and winked, knowing there was no way she’d get the reference.

To my surprise, she responded without missing a beat: “Born and raised.”

I quickly shot back: “Was the playground where you spent most of your days?”

We then proceeded to rap out the entire Fresh Prince of Bel-Air theme song, right there in the lobby with the other candidates vying for the position.

They had no clue what we were talking about, and looked at us like we’d just suggested barbecuing their babies.

I knew I had a friend for life. I just… wasn’t quite sure how to initiate a friendship.

A few months passed. I ended up taking that job, but it didn’t start until July. I was secretly hoping the Fresh Prince fan would have taken the job too. She did.

I was still an asshole, though.

She was quite possibly the friendliest, coolest person I’d ever met (I later found out that her friendly unassuming demeanor and unrelentingly sharp sweet-talking had once allowed her to walk on an airplane, for free, without a ticket), and even though we worked together closely on a daily basis, I was still too much of an asshole to even suggest that we hang outside of work.

Then one day, she offhandedly said that we should get a drink. “Okay,” I said, with the apathy of a My Chemical Romance-loving teenager with freshly-dyed black hair and Sharpie colored nails. “Whatever.”

“How about a bar in Red Hook?” I offered tentatively. (Being new to Brooklyn, I’d never been to Red Hook, but I heard it was super cool.)

“Sure!” she said, excitedly. “Just let me know where and when.”

For an introvert, the prospect of being tasked with choosing not only the LOCATION but also the DATE and TIME of a Hang Out Sesh™ (and for an inaugural Hang Out Sesh™, no less), is akin to climbing Mount Everest.

(And, considering that I am about as athletic as a Jello mold, that analogy is particularly apropos.)

I consulted my associates (Yelp and Google Maps) for “coolest bar in Red Hook.” I found a place that seemed to fit the bill. Divey (because dive bars were totally hip) but had clean bathrooms (because I’m not a masochist) and also served food (because I tend to plan my life around my next meal and didn’t want to be stranded in a hunger emergency). I combed our respective work schedules for a time we were both free.

Then, the moment of truth: I texted my soon-to-be work bestie the name of the place, suggested a date and time. When she didn’t respond within 0.03 seconds, I immediately wanted to crawl into a hole and die.

Less than a minute later, she responded. “Sounds great!”

I arrived at the bar embarrassingly early (I like to arrive at least 15 minutes early to meet people, because then I can pretend they’re entering MY space, which gives me the illusion that I have some semblance of control over the situation), ordered a beer, and scoped out the perfect spot to sit—not too close to the door, not on top of the bathroom, good people-watching vantage point, but not such that it was obvious you were watching them, etc (it’s a science).

The time we were to meet came and went. I ran through all the likely scenarios in my head: She had been murdered. She actually hated me, and wanted to humiliate me. She was carjacked by a chimpanzee high on amphetamines.

Huh? There were two other people in the bar, one elderly white man, and a young black man.

(Future Work Bestie, an Indian-American woman, was nowhere to be seen, though I stared at the other two patrons for probably longer than they were comfortable with, just to confirm.)

I picked up the phone and called her. “Hey. Are you at Brooklyn Ice House?” I said, accusatorially. “Yeah!” she said. “Where are you?”

That’s when it hit me.

“Where… am I right now?” I asked the bartender.

“Where is… Brooklyn Ice House?” I asked her.

I downed my beer, paid the tab, picked up my ego off the floor and walked next door to the actual place where we were supposed to meet. 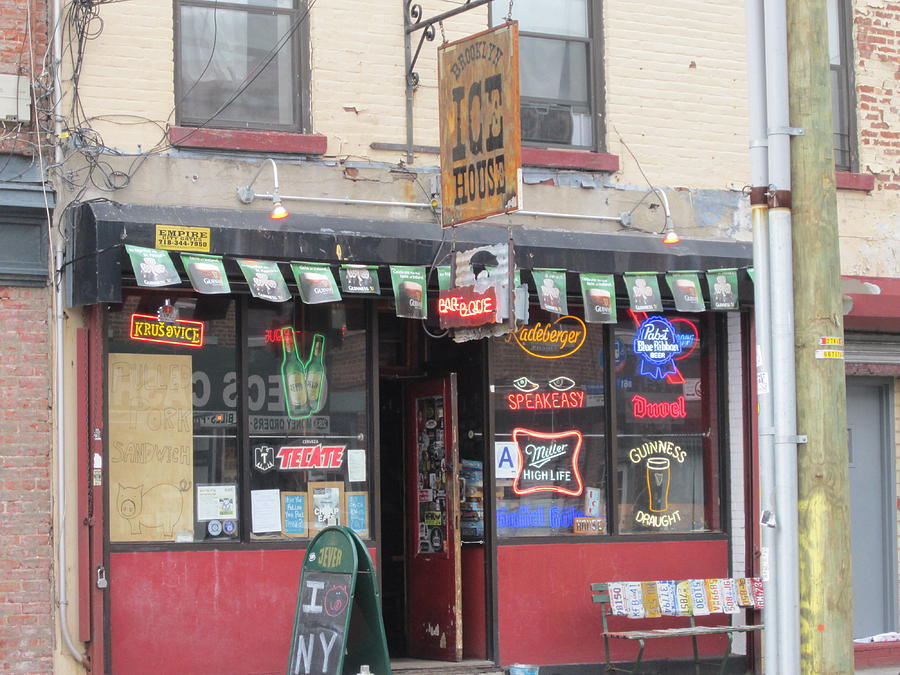 She greeted me with open arms and said, “I’m so happy we could hang out outside of work!”

Despite the foible, she really did end up becoming my work bestie, and a bestie for life. On one occasion years later, I introduced her to somebody as a “work friend,” and she immediately took offense, cutting in and saying,

“No. We are NOT work friends. We are FRIENDS. Never forget Fresh Prince!!” (Guess I was still an asshole.)

For the record, both Brooklyn Bait and Tackle and Brooklyn Ice House are lovely dive bars and I would happily meet a friend at either of them at any time, provided that we have prior confirmation concerning which venue, including but not limited to GPS coordinates, and emergency flares (just in case).

Rachel has also written about finding her place in NYC  via a coffeeshop, bar and soulmate.