Nibbling on truffle fries, delicious drinks and more on a date at The Dead Rabbit

Friday 3:45.  Myself, and my partner in crime (figuratively) for the better portion of that particular evening, arrived early.

“We’re gonna beat the Friday mob for some ‘parlor’ seats!” we foolishly thought.

The plan was: chill downstairs, then storm the parlor stairs at the stroke of 5 o’clock.  A foolproof plan, but contingencies/exigencies can (and did) occur.

“The Dead Rabbit Parlor and Taproom to re-open at 5:00pm.  We apologize for the inconvenience.”

Inconvenient, but not deal-breaking in the slightest… we just spent the next 1.5 hours at Shorty’s on Pearl Street.

Great times there (refer to my to-be-written review), and we warmed up with a few happy hour dranks and were ready for the best mixological concoctions this place could throw at us.

WRONG!  Line outside, filled to the gills, people waiting to get to the parlor.  We. F**ked.  Up.

“Forty-five minute wait to get to the parlor for you two” the doorman said, he handed me one of those vibrating timers that people get at TGI Friday’s or Chilis, and we braved the taproom crowd.

Unlucky, huh?  But wait!  Someone got up from the bar soon after we came in, and my partner for the evening was able to take a seat (I was being gentlemanly, and she did have 1-2 inches on her heels).

Note: On days such as the one I am writing this review about.. make sure the company you keep is aesthetically pleasing (smelling good is a plus).. as you will be squished damn close together in the taproom while waiting for access to the upstairs.  For the most part, this was a non-issue.. haha 😉

Anyway, to the booze!  Seeing as I had been drinking gin prior to coming here, I decided to stick with it.

The Gallus Mag fit the bill perfectly, pretty much a more bitey gin and tonic (bet it’s those bitters). 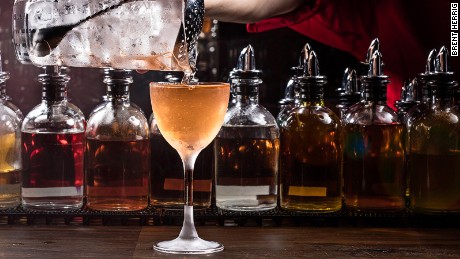 Lady opted for a Perfect Lady, definitely something to aspire to for this particular lady… she gave me try, and it was tasty; it was sweet (but not too much), was reminiscent of a Bellini (thanks to the Prosecco no doubt… not a bad thing), and the floral Jasmine went well with the citrus-y zing permeating the drink.

Content to nurse our drinks (and our pre-existing buzzes) downstairs, we were each about halfway through our drinks (due to a great amount of self control I promise you) when the vibrating timer went off in my butt pocket… quite the surprise if I do say so, I thought someone was violently grabbing my cheek for a second…

Anyway, before we knew it, we were upstairs.  I must say, it was a far cry from the sardine can we had just departed.

Cozy, dimly lit, atmospheric… with the walls adorned with pictures of random dudes. 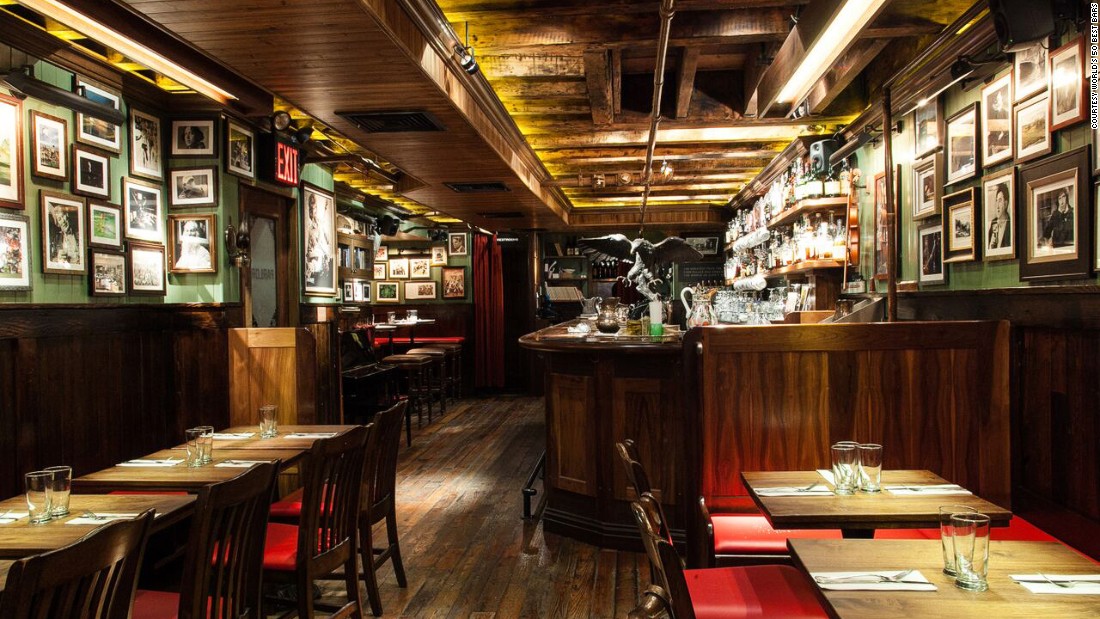 The menu design stood out , as the artwork and drink themes alluded to the history to the name of this place… pretty damn clever.

Think old school speakeasy vibe (all the wood finishing), but they also serve food (more on that soon)! 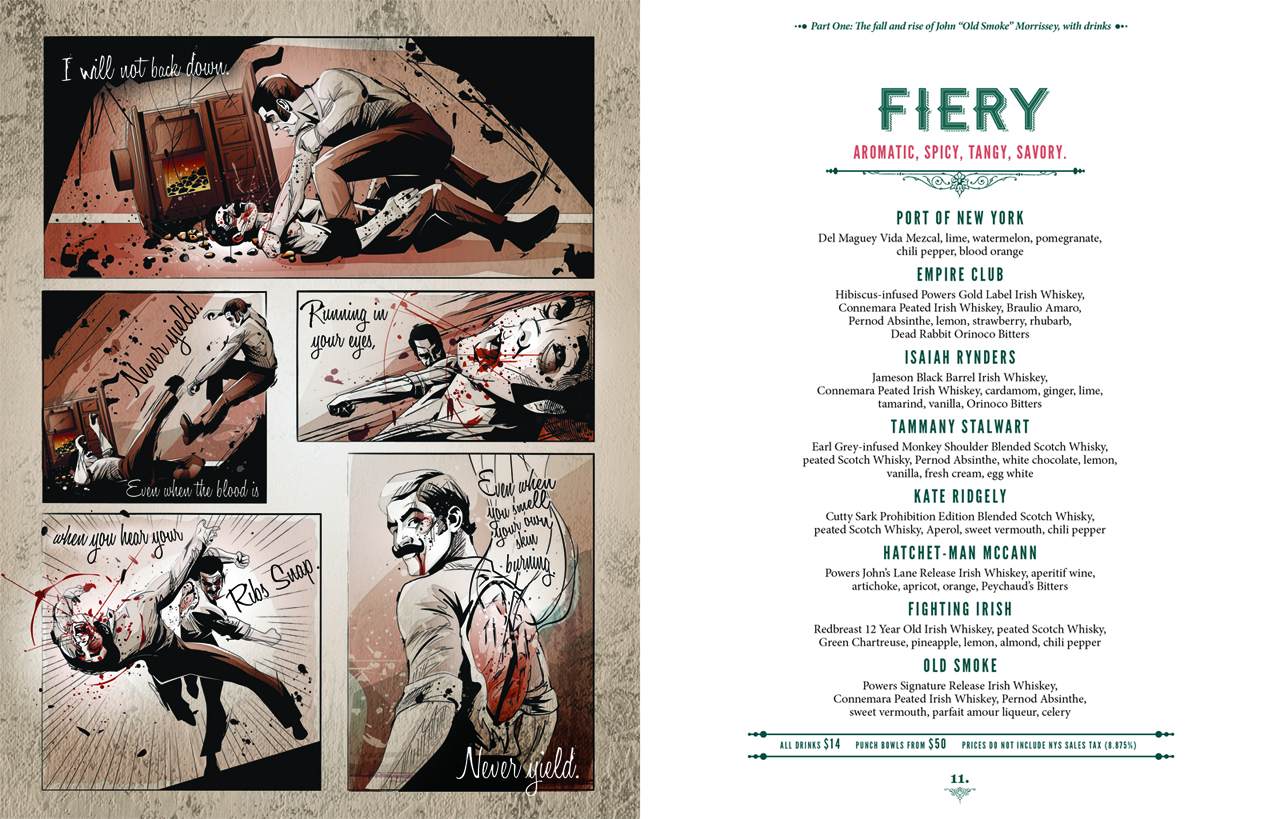 Around 6:15, if memory serves, we placed orders.  Lady got herself a Fugitive, and I opted for Cold Blood (as it was a gin base).

The former was nice and mellow, but still strong, due in no small part to the green tea infused whiskey.  And mine was appropriately bitter (it was in the “Bitter” themed drink section after all).

Definitely unique first drinks… made me excited about the extensive drink menu. But booze without dinner at this point would have been ill advised, and with tasty noshes available upstairs, we went for it.

“For special we have $1 oysters…” was what red dress server lady said (Laura,I think?).  And that was all she needed to say.  “We’ll have a dozen!” was what myself and dining buddy/partner shouted right after.

The food was all pretty damn tasty.

It’s tough to mess up oysters, and they did not mess them up.

Briny and pretty large, they went down real easy, and the dish they were served on was pretty damn elegant.  The whole thing could’ve used one more bottle of hot sauce though (tiniest bottles of hot sauce evarr!)!

Crispy chips (French fries) to nibble on were also welcomed.  I know many a food snob exclaim that “truffle oil is SOOO 2013”, but I still enjoy it.

And on the chips/fries, the truffle taste isn’t obnoxious.

Like a wise man once said, “If you do something right, people will wonder if you even did anything at all.”  Basically, it was a light hint of truffle, you may not have even noticed it if the menu didn’t call attention to it.

The crown jewel of our nibbles came in the form of the pulled pork sliders. 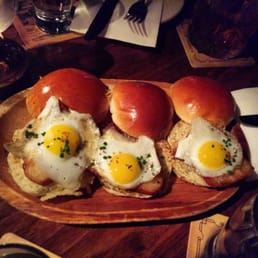 Three slabs of pulled pork, topped with a quail egg, and sandwiched between soft bread. By night’s end, we were both content: a nice buzz going, and full stomachs.

Tasty food, clever drinks, and intimate atmosphere… only thing you need to bring is good company 😉

Just as I was running low on hope, FiDi actually produced ONE great spot! Thank god.

Josh Versoza has also written about a night at Virgola with the girl in the red dress.

Joshua Versoza
“I know words… I have the best words【==】”

The Top 5 Foods I Dropped on My Baby’s Head across CA, Portland, and Seattle