An ARDUOUS Hungover Trek to My Bronx Hangover Cure

A hangover and a snowstorm can’t keep me from this bliss.

Each year I find myself resenting the first instance of snowfall a little more than before.

I was born during a snowstorm in January of ‘87, and around every year my sister recalls the day I came back from the hospital as myself, my mother, my father, and grandfather picking her up from daycare during a snowstorm. As I grew into a child snow used to embody and imbue me with a sense of play.

Offering the only reprieve from school an Indian child could get away with during the school year, I waited and prayed for snow days to come.

But as each year passed I grew to know how truly cumbersome snow could be. It started with simple tasks like cleaning the driveway and sidewalk, which occasionally intersected with digging out the car and helping the neighbors. Minor inconveniences, but still tolerable. Eventually though as each winter came and went snow began to embody a sense of loss. Specifically time lost. Time I mismanaged each year prior, the time I would lose trying to navigate myself through it, and the time I would lose when all the cleaning would be for naught when snow would eventually return. I grew to resent it, especially after people would have the misgivings about how well they thought they had cleared up the mess only to have the remaining frozen fragments of snow crystallize into sharp stalagmites, sprinkled with equal measures of salt and dirt that cushioned itself into the underbellies of cars and the side of roads and crosswalks.

But what I think I truly dislike most about the snow is how it challenges you to move. The ground is smothered indiscriminately and there is a constant struggle to gain any sense of balance or footing within it. I like to tell myself I’m a simple man, who has always yearned for a world that would come to him, and the snow prevents that fantasy from feeling real. It’s my fault for ever believing that life can unfold before me with minimal effort, but still, the snow makes reality feel more real than it has any right to be. But I digress.

It’s December 18th, I’m hungover, in a shared studio basement apartment in the Bronx, which is as glamorous as you might imagine but I insist you don’t, when a text wakes me up at around 11 in the morning.

It’s then I look out the window and I see it, fucking snow.“Fuck,” I let out to my window, as the snow proceeds to fuck me back. It’s sticking to the metallic stairwell leading to my apartment door.

My body’s a temple and right now the temple feels like shit. Every hangover I have ever gone through comes with it’s own trajectory of ups and downs, smiles and frowns, and as much as I like to tell myself that the old hair of the dog trick actually works, I just can’t feign ignorance on how repugnant the sight, smell, and sensation of alcohol would be back in my system at this minute. I need carbs, food, something to cushion my belly for the inevitable ebb and flow of pain and passivity that hangovers take me through.

I settle on a chicken roll and chicken salad from Pugsley’s Pizza, a family run pizza joint just outside the walls of Fordham University that is normally a handful of minutes away on foot from my apartment. 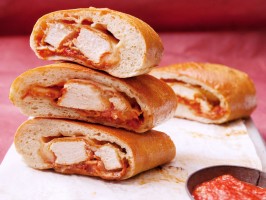 Snow takes any sense of the word normally away and decides to make it it’s own plaything.

What has for years been only a couple minute jaunt became a half an hour nightmare of hilarious proportions.

Remember how I was hungover? Well whatever semblance of style I may possess in sobriety is destroyed in drunkenness and composited from the wreckage when hungover. I decide on a winter coat, just thick enough, absolutely no undershirt because I can’t be asked to try to find a clean one in a pile of laundry that unceremoniously might have met it’s end of any sort of cleanliness because it happened to land on the floor of my apartment. Again, I’m not sure. And underneath said clothing?

What awaits me when I step outdoors might just be the most important moments of my life until this point. Granted, hungover, every moment that inches you closer to clear headedness might seem important, but until I have the misfortune of going through them they aren’t nearly as important as you might want to have me believe.

I assemble my regala and head out. Each step up the staircase feels less daunting then the one before because instinctively I had lulled myself into thinking snow’s havoc is linear, that it contains some semblance of logic. Alas, my naivety proceeds once more to fuck me over as the second I step off the curb I’m enveloped by an invisible puddle. The type that all appears only ½ an inch deep but soon swallows your foot to midleg.

Fuck, I say to myself, in an oxymoronic attempt to appear cool while literally freezing to death. Did you remember that I did not mention socks? Because up until this point I didn’t think I forgot socks.

My feet become submerged in just the right amount of ice, snow, cold water, and regret that won’t make me sick, at least sick enough. And so I trudge through it. The snow makes the mundane a chore. Each step sloshes and I ask myself why why why. The hangover grows stronger and my footing grows weaker.

I survive all the way to Pugsley’s where I’m met with the same aroma that hit me the first time I came there, for my little brother’s graduation all of six years ago. 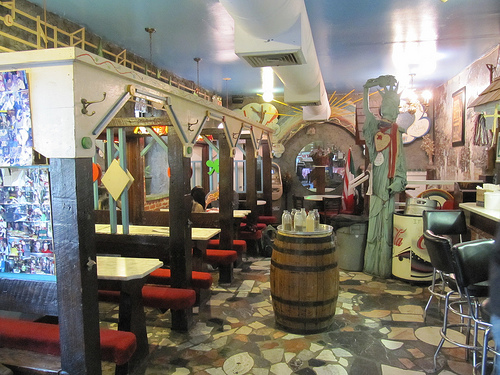 The same faces smile back at me as I mumble out my order to them. Each time I come, the family that runs the place makes it seem like I never left. 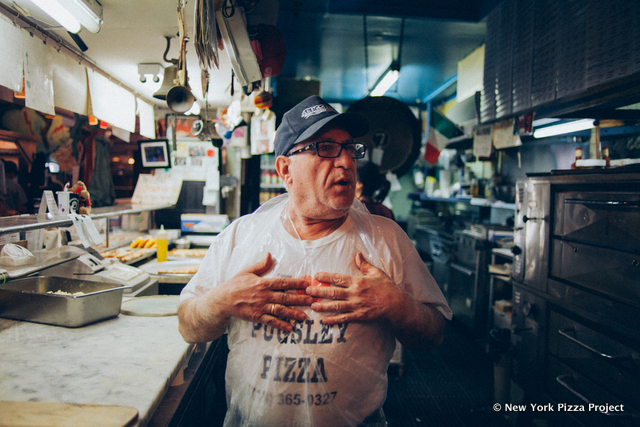 Granted all we have shared between us is smalltalk, but isn’t most of life, most of getting out of your comfort zone and being proactive in the world nothing but small talk? The sharing and continued cultivation of an inside joke that is almost always ready but too precious to be shared with the outside world?

I’m not sure, and quite frankly you should never trust me to be sure about anything aside from the fact that when I’m hungover I’ll tell myself I’ll want to be healthy (chicken salad) but actually just want to load up on carbs (chicken roll)? The exchange my money for the food.

I can’t remember how good the chicken roll actually tasted that Saturday, but I know how good it felt, and it felt divine.

I demolished it in what must have been a matter of seconds to the world around me. I am warm, I am temporarily satiated and I am prepared to tell myself that it’s ok, if the chicken salad was the only thing that makes it back to the apartment it’s the only thing that healthwise will matter in the end. I’m starting to wonder if the fictions we tell ourselves aren’t the basis of the best jokes that life plays on us. The majority of the staff let out a hearty chuckle and wish me well on my way back to my place. I stop to get two 2 bottles of diet pepsi from 711, again assuring myself that I’m putting heath before hedonism, and manage to trudge my way back to my apartment. It’s 45 minutes after from when I first set out, but for the first time since I have been in the Bronx I spot my landlord shoveling snow.

“How you doing Raj?” he asks

“No idea man, no idea,” I tell him, before reassuring myself that, “it’s the same always man.”

“Same as always?” He asks, “Certainly look interesting for snow.” he says after giving me a look over.

“That’s the thing with the snow my man, it’s either always the same or never the same.” Yes, I actually said this, yes, I was and might still be hungover and desperately want to avoid any topic that coalesces it’s way back into bills or rent.

“Haha,” he says as I try to ease my way down my stairwell, “You’re a funny guy, c’mon, I’ll clean the snow down your stairwell.”

“Don’t mention it,” he says, “Just make sure you and your brother pay your rent on time.”

“You know I’ll try,” I joke, and we exchange a mutual chuckle that extends down the stairs.

“Likewise,” he says making his way back up the stairs.

I walk back into my place, and immediately pass out.

And I’d like to tell myself that in the second, before I managed to devour the chicken salad, with the bed ‘splayed before me that maybe I did not resent the season, maybe I had made peace with the snow.

But fuck that, and fuck the snow.

Do your own (hopefully not snowy) trek.

This is Raj’s first Waddle story. If you’re looking for a hangover cure, look no further than this.

Raj Sharma
In an interstellar burst
I’m back to save the universe.

A Penguin Whacking Another Penguin On The Head